Get onto the Royal Mile road (which comprises Lawn Market, High Street and Canongate) which runs down from the castle; and near the bottom of the High Street section (between North Bridge and St. Mary’s Street), on the left side of the road you’ll see a large upright monument which was formerly a stone drinking fountain.  You can’t really miss it!

Found just yards away from the house of the religious lunatic John Knox, this is one of several wells that could once be seen along the old High Street, or Royal Mile, near the middle of the city.  A fast-flowing spring of water was contained within this solid stone monument first built around 1675 by the King’s mason, Robert Mylne.  The fountainhead was rebuilt at a later date and it supplied water for the inhabitants of the old town. 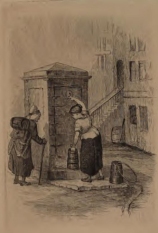 It has a small semi-circular water trough at its western base and is ornamented on this and its eastern side with small mythical fauns, out of which water emerged.   The local council should ensure to make the well work again, giving people clean drinking water when they need it.

The local historian Stuart Harris (1996) puzzled over the origin of the name ‘Fountain Well’, wondering whether it related to a nearby mansion, but he wasn’t too clear in his description for those who live outside of the city, where this mansion was.  He wrote:

“It is…reasonable to suppose that the present well got its name from being in the general vicinity of the mansion, and that the mansion and the (Fountain) Close must have been named for another well, now lost, in the close or at its head.  It is suggested in Wilson (1891), but scarcely proved, that it was the Endmyleis Well…which is mentioned in…1567.”

Bereft of natural animism, the site is more likely to be of interest to architects than the usual hydromancers and their exploratory ilk…