Posted on May 15, 2015 by pixyledpublications

The site is found down Spring Lane at the south end of Henham Park. The current A145 meeting the A12.

A large structure is a brick and stone arch and which has two low seats inside, giving the alternative name of Tramp’s or Traveller’s Rest having also brass cups attached to the structure for anyone wishing to drink there. The age of the fabric has said to be mainly 1780, although one view was that it was erected by the first Countess of Stradbrooke in the 19th century and may be that recorded in 1833 in the poem ‘Lady’s Fountain’ poem by Agnes Strickland (the alternative name Lady coming from the Lady Strickland).  Another view is that some of the fabric is 13th century in origin.   The structure is now dry and overgrown, apparently last having water in the 1900s. 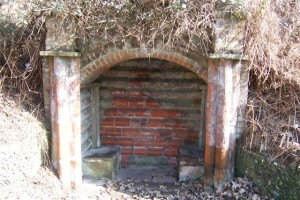 The spring is said to be near the reputed to be the place of King Onna’s death (654 AD). This was the battle of Bulcamp where Onna was chased by the Pagan Penda along Kings Lane, a lane which cuts through nearby parishes of Sotherton, Henham and Blyford to here were they stood their ground and he and his son Firminus were killed and buried. The well being erected where the king’s body fell. The legend clearly explains the site’s other alternative name of Queen Anne’s well…Anne being close enough to Onna to be semantically changed over time, and misrepresented as a Queen rather than a King!