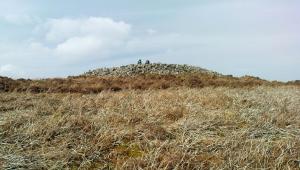 Probably the easiest way to get here is by starting on the Moor Road above Burley Woodhead, where the road crosses the Rushy Beck stream.  Looking upstream, follow the footpath up the right-hand side of the waters, nearly all the way to the top.  Where it crosses a footpath near where the moor begins to level out, look up to your right and you’ll see the raised crown of stones a coupla hundred yards off path, NNW.  That’s it!

This very large Bronze Age cairn was reported by Faull & Moorhouse (1981) to have been surrounded by a multiple stone circle, citing it to have been shown as such on an estate map of Hawksworth Common in 1734. When I contacted the Yorkshire Archaeology Society to enquire about this map, it could not be located. (This needs to be found!) No evidence of such a stone circle presently remains, though there were at least two standing stones once to be seen at the edge of this tomb, though only one of them — now laid more than five-feet long in the heather — is still evident on the western side of this giant tomb.  But anyone who might know anything about the 1734 Estate Map – pleeeeez gerrit copied or take a photo of it! Then stick it on TNA so everyone can see whether the circle surrounded this, or the Great Skirtful of Stones, 500 yards to the south.

The Little Skirtful is in better condition than its big brother on the hill to the south and — unlike the Great Skirtful — there are said to be at least five cup-marked stones amidst the great mass or rocks constituting this site.  There could be more.  The carvings are just single cup-markings etched onto small portable stones, typical of sites like this.  They are found near the centre above a small cist and outwardly towards the northern edges of the cairn (for more info about them, see the main entry for the Little Skirtful Carvings).

It’s been said by Stan Beckensall (1999, 2002) that no cup-marked rocks “are known near…the really large cairns” on the moor—meaning the Little Skirtful and her allies—but this isn’t true as there are at least 4 definite carvings (a possible fifth seems likely) on the moorland immediately around the Little Skirtful.  Though to give Beckensall his due, if he got his data from the Ilkley archaeologists, his information isn’t gonna be too accurate, as they’re quite unaware of many sites on these moors!  A good number of local people have a much greater knowledge-base on such matters than those in paid offices, as this and other websites clearly shows.  The times they are a-changin’, as one dood said, not so long ago…!

The creation myth of this place tells that the giant Rombald (who gives his name to the moor) was in trouble with his wife and when he stepped over to Almscliffe Crags from here, his giant wife – who is never named – dropped a small bundle of stones she was carrying in her apron. (In traditional societies elsewhere in the world where this motif is also found, it tends to relate to the site being created by women.) Harry Speight (1900) tells us of a variation of the tale,

“which tradition says was let fall by the aforementioned giant Rumbalds, while hastening to build a bridge over the Wharfe.”

Variations on this story have said it was the devil who made the site, but this is a denigrated christian variant on the earlier, and probably healthier, creation tale. Similar tales are told of the Great Skirtful of Stones, 500 yards south.