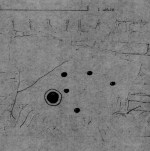 A rare find in Calderdale, as it’s only one of a very small number of full cup-and-ring designs — though its exact whereabouts remains elusive.  From Heginbottom’s (1979) OS-reference, it’s close to a pretty built-up area, so may be destroyed.

He described it as a “large block with cup and ring markings, built into a dry stone wall,” 900ft above sea level. So where eactly is it…?