Along the A836 between Tongue and Bettyhill—nearly 5 miles (7.75km) east of Tongue—take the minor road north to Modsary and Skerray.  Some 1.75 miles along you’ll notice an inland loch to your right, and where the loch finishes, take the minor track up on your right to Modsary.  Walk past the cottages, through the gate and walk diagonally left down onto the moor. A small cave is across in front of you. Head towards that, but on the flat-ish piece of heathland barely 50 yards before it, above the small burn, look around for the low circular walling.

This previously unrecorded prehistoric hut circle was rediscovered in May 2018 by Sarah Maclean of Borgie during a brief excursion here, looking at the ancient clearance village of Modsary (which appears to be Iron Age in origin).  In walking onto the moor, shortly before leaving me to my own devices, she pointed out this low ring of barely discernible stones, wondering, “is this another hut circle?” (there are some on the western-side of the road from Modsary)  It would certainly seem so! 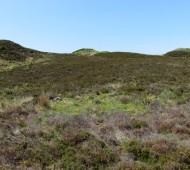 It is constructed upon what seems to be a natural platform of earth above the slow-running burn.  A low ring of stone walling defines the construction: visible in parts, covered in vegetation for the most.  With an entrance on its southeast, the ring measures roughly 9 yards by 10 yards in diameter; with its outer walls being less than 2 feet high all round; but the width of the walls in some places measures up to 3 feet across.  It is certainly man-made and is certainly olde.  It requires excavation to assess its original construction period, although based on others I’ve seen that have been dated, would seem to be Iron Age in origin.

From this to the small cave that I mentioned, a most peculiar rectangular stone construction is evident 2-3 yards below it; and heading 40 yards south, beneath a craggy hill, a line of ancient walling runs SE-NW, with a much overgrown semi-circular arc of large stones, seemingly artificial in nature.  It would seem there is a lot more hiding beneath the heather hereby than official records suggest…

Acknowledgements:  Massive thanks to Sarah Maclean for locating and showing me this site; and also to Donna Murray for giving me a base-camp. Huge huge thanks indeed.