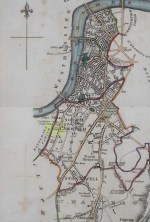 Position of Vauxhall Well on 1824 map

In Thomas Allen’s (1827) huge survey of Lambeth parish, he told that there was little of any interest along Wandsworth Road, apart from a good orchard, “and a fine spring called Vauxhall Well.”  According to Daniel Lysons (1792), it was located “not far from the turnpike”; and according to Mr Sunderland’s (1915), was to be found “on the right-hand side of the Wandsworth Road” as you walked down it to the south.  Thankfully its position was highlighted on the 1824 map of the parish (right) that accompanied Mr Allen’s work.

It appears to have been built over in the latter-half of the 19th century, soon after William Thornbury (1878) wrote that he thought the well was still visible, but vanished soon after.

The waters were universally ascribed by all historians, from Mr Allen onwards, as being,

“esteemed highly serviceable in many disorders of the eyes, and in the hardest winter it is never known to freeze.”

The name ‘Vauxhall’ derives from that brilliantly famous family name of ‘Fawkes’ (as in Guy Fawkes), being the ‘hall of Fawkes’.  The name was first recorded here as early as 1241. (Gover et al, 1934)