Get into the small town of Alloa, where the buses stand at Shillinghill.  From here walk southwest down Mill Street, which runs into Bank Street.  Keep your eyes peeled on your right-hand side, where outside one of the old municipal buildings you’ll see it standing upright.

Although now standing against the old buildings halfway down Bank Street, Alloa’s Mercat or Burgh Cross was initially set up at the crossroads 162 yards (148m) away, where Mar Street meets Mill Street and Bank Street.  It was moved to its present position sometime in the 1880s and knowledge of its early history is scant. 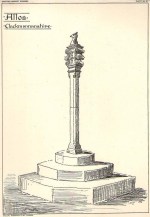 Standing some 10 feet tall, the monument was described in John Small’s (1900) rare magnum opus, where he details the architectural features of the monument, telling:

“The shaft, which rests on a base and three steps, is of the usual square section, with splayed angles, stoped at top and bottom, the top stop being rather peculiar.  The head of the Cross is composed of an oblong stone set upright, characteristic of the late type seen in Keikleour and Kinrossie.  The oblong is ornamented at the sides with debased volutes and acanthus leaves, the whole crowned by a wreath from which rises a griffin’s head, part of the supporters of the Arms of the Lords of the Manor, Lord Mar and Kellie.”