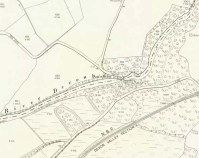 Somewhere hiding away above the north-side of the River Devon, just above the Vicar’s Bridge, a little-known healing well came into being following industrial workings in the glen in 1831 by a local iron-working company.  The waters were strongly chalybeate, or iron-bearing—and as the fad amongst the wealthy was, at the time, a love of Spa Wells, this mineral spring was broadcast as a competitor of the Harrogate and Bath Spas.  But it failed pretty fast, sadly.

Bottles of the water were marketed and sold as ‘Dollar Mineral Water’ in many of the large cities, but sales weren’t too good.  Johnston & Tullis (2003) pointed out how the waters would have been coloured like brandy; and despite it being good for anaemia, a good tonic, and favourable in treating cuts and bruises, the mineral spring was no longer of any value as a business, dying a quick death.  Local people still kept using the waters, but in recent years the spring appears to have died too.