Enter Mugdock Country Park from the south-east entrance along Mugdock Road from Milngavie. The Stone is visible in rough grass from the path to the south – west of Mugdock Castle. It is about 2 feet high and is identified by a small coloured wooden marker post.

The earliest records of this stone occur in the mid-nineteenth century.  Writing in 1854, Hugh Macdonald described the Stone:

“There is an echo of considerable local celebrity at Mugdock, the reverberative powers of which are frequently put to the test by visitors. The spot from which the echo is most distinctly heard is a slightly projecting rock, on a verdant declivity, about a hundred yards to the south of the castle. A person standing on this, looking towards the edifice, and speaking pretty loudly, will hear his words, or even short sentences uttered by him, repeated with startling distinctness, as if from some mimic at the old tower. Of course, we give the echo sundry specimens of our vocality, and to its credit we must say that it flings them back with amazing fidelity. Paddy Blake’s echo, which on the question being put to it of ‘How are you?’ invariably answered ‘Pretty well, I thank you!’ was unmistakeably a native of the land of Bulls. The Mugdock one must be as decidedly Scottish, as it answers each question put to it by asking another. If there were any doubt on this subject, however, we might mention, in support of our supposition, that it is quite au fait at the Gaelic, as we proved to the entire satisfaction of a cannie bystander, who, after listening in silence for some time to our mutual interrogations in that classic tongue, at length exclaimed, ‘Od, man, that’s curious! Wha wad hae thocht that a Lawlan’ echo could hae jabbered Gaelic?'” 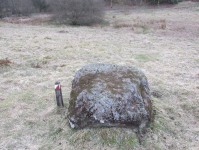 Samuel Lewis, writing before 1846:  “At a distance of about 300 yards from this castle is a remarkable echo, which distinctly reverberates a sentence of six monosyllables, if uttered in a loud tone; and this not till a few seconds after the sentence is completed”.

You’ll be impressed by the echo!

Stand by this low, flat topped stone, and your calls will echo distinctly, whether or not you face the castle. We found that the echo seemed more pronounced after dark, but that may have been a result of there being less ambient noise at night. We can only speculate as to how people in distant times reacted to the echo, and it is interesting how MacDonald’s Gaelic-speaking friend reacted to the echo, almost as if he believed it to be a living organism which he did not expect to reply in his own language. We were both impressed by this powerful natural phenomenon.

Acknowledgements:  Thanks and a tip of the Hatlo hat to Nina Harris for informing me of the existence of the Echo Stone and for driving me up there a couple of times.