The site of the stone rows

Take the A836 road between Bettyhill and Tongue and, roughly halfway between the two villages, a few hundred yards west of the turning to Borgie, park up at the roadside. Cross the road and through the gate, follow the waters of Allt Loch Tuirslighe for 100 yards and then walk uphill onto the moors. You’re damn close!

This megalithic stone row was uncovered in the late 1970s – which is no surprise to be honest.  It is a very low parallel row of small upright stones, which Freer & Myatt (1982) initially found to consist of two rows of standing stones, twelve in all. When we visited the site a few days ago, I could find only ten of them that could appreciably be termed authentic – and that was stretching it a bit!

Several of the low stones

Close-up of the small stones

Of the two stone rows presently visible, the easterly one is easier to see and consists of seven small stones, running almost in a dead straight line NNE.  A few yards west we find the second stone row, in which I could only discern three tangible contenders, also running NNE, but slightly fanning outwards and away further north. When standing in the middle of the two rows, they align to a small natural rocky outcrop on the near-horizon 100 yards away, upon which Paul Hornby recently discovered 3 or 4 faint cup-markings. If we turn 180 degrees and look in the opposite direction, the alignment of stones points to the highest peak in the far distance. 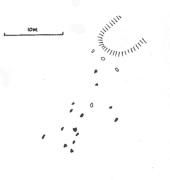 All of the stones are small and difficult to see upon initial exploration. The highest of them stands no more than 1½ feet tall, with their average less than 1 foot. One of the stones in the eastern row is covered completely by vegetation.  However, in earlier assessments of this site, quite a few other stones were visible.  Its brief history and appearance was described in Leslie Myatt’s (1988) survey of such monuments in this remote region, where he told:

“This very ruinous setting of stone rows was fist recorded by the Archaeology Division of the Ordnance Survey… Peat cutting has taken place in the area and undoubtedly a number of stones have been removed from the site.

“(The illustration) shows the result of a survey carried out by the author showing a total of only 16 stones not more than 20cm above the surface.  Because of the small number of stones remaining, it has not been possible to superimpose a geometric construction on the site.  The ground slopes upwards to the north-northeast, at which end of the setting is a low peat-covered mound about 10m in diameter.  It has no distinctive features, although it does not appear to be natural…”

The site is described in Alexander Thom’s (1990) major survey, but sadly he didn’t turn his direct attention here, so we still have no accurate geometric or astronomical assessment.  A few years later Aubrey Burl (1993) gave us details of the larger initial size of the complex and told us that at

“Borgie, near Torrisdale Bay on the north coast of Sutherland, perhaps an early site, has three or four lines with the suspicion of a fifth.  The rows narrow from their base 20ft (6.1m) across to 18ft 8in (5.7m) over a distance of 59ft (18m), a contraction as they worm uphill towards a peat-covered mound of hardly a quarter of an inch in a foot (0.6: 31cm).”

The small peat-covered mound which the stone rows lead up to was suggested by Robert Gourlay (1996) as “perhaps a small cairn.”