Posted on September 6, 2014 by megalithix

Take the same directions to locate the cup-and-ring stone of Ballochraggan 12.  There are several rocks adjacent.  The one immediately next to it, to the northeast, is the one you’re looking for.  Be gentle and careful if you’re gonna look at it — deadly serious, be very careful indeed!

One of the most intriguing and most fascinating of all the prehistoric carvings I’ve yet to discover.  Not that this was all my own work. If it hadn’t been for Paul Hornby, we might have simply walked past it as being little more than a single cup-marked stone—and in this area, single cup-marks tend to be little more than geological in nature.

After we’d looked over several of the registered carvings close by, Paul took to looking at this one.

“Looks like we’ve got just a single cup-mark on this one Paul,” I said, “with possible half-ring.”  Thankfully Mr Hornby gave it his better attention. 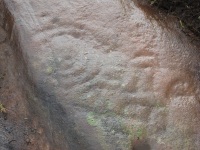 The sun was still out and shining across the smooth rock surface, which tends to mean that you’re not seeing any carving on the stone quite as good as it actually is.  Thankfully however, the sun was beginning to get lower and, when this happens, if we wet the rock, any carvings that might be there stand out much better.  And this little fella just seemed to get better and more curious the more attention Paul gave it!

The first thing that became obvious were a series of faint carved lines above the single cup-mark.  Initially these didn’t seem to merit much attention (straight lines on rock are usually more the product of geophysical action than that of humans), but as the rock got wetter, Paul saw something very distinct indeed.

“There’s a face on it!” he exclaimed.  And indeed there was.  A Rorschach response no doubt, but it was still very much like a face.  This looked for all the world akin to the stylised olde English gentry sort of countenance, as in old cartoons.  It was quite ‘distinct’, as such characters themselves insist on being!  Yet around this initial face, more lines seemed to be emerging as the stone gave up more and more of its hidden story.

Standing back from an initial investigation, the carving was seen to consist of a triple-ring, but without the traditional ‘cup’ in its centre.  Instead, the centre was marked simply by a small ‘dot’—perhaps, originally, being a small conglomerate hole formed as a result of another tiny harder fragment of stone falling away from its larger mass.  But a ‘dot’ it was.  The other carved ‘lines’ however, immediately below and attached to the triple-ring, gave us something almost unique—and another strong Rorschach response.  As the photos clearly show, we have a distinct second ‘face’ made up of the same lines but in a quite different form.  This ‘face’ has all the attributes we usually associate with pictures of mythical spirits, demons, or a mask—hence the name!

Paul took a series of fine photos, hoping that he could catch the image that our eyes could clearly see.  And thankfully, his digital camera brought the image to life even better than our eyes did!  The ‘mask’ is comprised of carved lozenge forms, akin to the more decorative ones we find at Kilmartin, and more especially around Newgrange, Ireland.  We sat and talked about this: wondering and working out routes that we’d take over mountains and moors, from Ireland, to Kilmartin, then onto Ballochraggan, etching the same designs onto the rocks hereby and attaching similar mythic notions to them: of shamanism and kingship; underworlds and journeys—paradigms lost and certainly misunderstood in the non-polysemia of many modern academics.

…The stone here was still slightly covered over and, beneath the loose grasses, another feature emerged of another petroglyphic rarity.  At the topmost western side of the  rock a straight line ran across the surface, seemingly marked by the hand of man, with a curious little line almost doubling back on itself for just an inch or so, and then feeling to run down the stone, towards the concentric rings and the face below.  When we stood back and took the photos, this line and its tracer took on a form that I’ve only seen echoed in one of the Netherlargie tombs at Kilmartin, Argyll, 44.4 miles (73km) to the west.  It is very distinct.

Spuriously ascribed as being ‘axe’ carvings (oh how archaeologists love this Rorschach projection), the Netherlargie North tomb cover-stone in Kilmartin has a series of burial ‘urns’ or beakers carved onto the rock, amidst a scattered collection of cup markings. (Beckensall 2005:73-4; Bradley 1983:92-3; Royal Commission 1971:68-70; Twohig 1972, etc)  Here too at Ballochraggan we find another such symbol, but just a singular example, much larger and more clearly a beaker or urn, as are traditionally found within many old neolithic and Bronze Age tombs; although no tomb is immediately apparent at this Ballochraggan carving.

The entire carving is very faint indeed (you can’t even see it when you’re looking directly at it unless conditions are good) showing that it remained open to the elements for thousands of years.  Other adjacent carvings lack the erosion that we find on this one, even on those which, as archaeologist Lisa Samson said, is “softer sandstone rock than this one”—implying that it’s one of the older carvings in this incredible cluster.

The carving was covered over when we finished examining it, to ensure that Nature’s erosion keeps it alive for just a few more centuries at least, hopefully…..

Acknowledgments:  Huge thanks again to Mr Paul Hornby for his considerable help with this site, and for use of his photos.