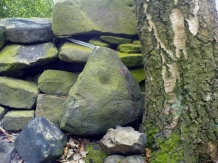 From Thackley corner, take the Esholt road down Ainsbury Avenue.  Walk past the Thackley football ground and another 50 yards on, to your left, there’s a field.  Cross this and go through the gate into the trees.  Another field is across the footpath, but turn right and walk on the muddy path, keeping parallel with the other field, until the walling bends round to the left.  About 15 yards round where the wall bends left, watch out for the silver birch tree and the small cup-marked rock at its base, right up against the wall.

This is an archetypal single cup-marked stone known as a ‘portable’ — though in its original state, when the rock was obviously larger than it is today, I doubt anyone could have carried it further than a couple of yards!  The stone has been split from a larger rock, and we’re unsure the size of its original form—but presume it to have been perhaps double its present size.

The broken rock stands (now) upright against the wall and nice birch tree (Betula pendula), but wasn’t like that when we first found it, and the cup was barely visible as it faced down into the Earth.  As the images show, we have just a single cup-mark on its outer face.  It looks typical of those carvings found in the larger Bronze Age cairns scattering the moors to the north, but we have no evidence nor folklore indicating the existence of such a monument hereby.  The extensive amount of overgrown multiperiod walling all over this woodland may have used up such a cairn, but we will probably never find out, as the woods have been overused by industrialists, who are now, slowly, turning the woods here into a park.