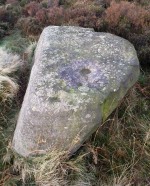 From the B6265 valley road between Bingley and Keighley, just near Riddlesden Hall, take the road up and over the canal into Riddlesden, bearing left up past West Riddlesden Hall and up Banks Lane. As you reach the T-junction at the top, where you hit the Silsden Road that goes round the moors, park up. Takes the footpath across the road and walk straight uphill, all the way to the top just above where the tree line ends and you’re on the moorland flat.  Bear right, over one wall, then walk 20-30 yards further and the stone in the photo here should be roughly under thine nostrils!

There’s no previous record of this as a cup-marked stone, so it needs adding here.  I’ve gotta admit that I’m not 100% sure about it as a real prehistoric carving — but considering the dubious nature of the nearby Carving no.58 and the Rivock Nose Stone, this is roughly somewhere in-between in terms of its legitimacy as an ancient carved stone.  Certainly I’ve come across other cup-markings, adjudged by newly-qualified ‘professionals’ as fine, but which I find highly questionable — so this one that Dave Hazell came across a couple of years ago should certainly be added to their professional rock art catalogues.

Close-up of the cupmarks

It’s simple enough: a four-feet long stone, whose top east-facing edge has been worked in more recent centuries by the miners who dug on the slopes below (perhaps to turn it into a gatepost?).  There are three notable ‘cups’ that are clearly visible on the photos here.  The topmost cup is something pretty recent, having had industrial attention given it; the largest cup may be natural; but the one in the middle seems to be what our English Heritage rock-art enthusiasts term a legitimate prehistoric petroglyph.  It certainly seems a good one!  Have a look for yourself and see what you reckon! It’s in a good spot and is certainly worth the wander, if only to have a look at other cup-and-rings in the region.