Take the B6246 road northwest out of Whalley, or else east from Hurst Green, until you hit the little village of Great Mitton, with its churchyard in the middle.  Go into the churchyard and you’ll find this weird-looking cross!

The curious-looking upright in the churchyard here has a mixed history by all accounts.  The oldest portion of the cross is universally ascribed to be the top section, rediscovered when it was dug up “shortly before 1801.” (Ackerley 1947) It possesses a carving of the crucifixion on one side, and some curious figures carved on the other, which some ascribe to being Jesus, but could well be the triple female element which would still have been prevalent in peasant culture at the time it’s thought to have been carved.  The original shaft carrying the ‘cross’ had long since been destroyed and so, according to Jessica Lofthouse (1946), 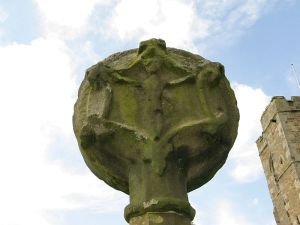 “In 1897 it was ‘re-erected to commemorate the 1300th anniversary of the reintroduction of christianity into Britain,’ with the new shaft we see today.  This is the oldest relic in Mitton.”

In J. Buckler’s early 1841 drawing of both sides of the carved cross-head we can see in greater detail the nature of the medieval rock art and this was described in Aymer Vallance’s (1920) decorative analysis of carved crosses in England.  He told that

“the cross-head at Mitton, Yorkshire…is peculiar inasmuch as the crucifixion is sculptured on both faces, but in totally different fashions.  That on the west face has the arms stretched horizontally, within a sexfoil frame, and might well be of the thirteenth century.  Whereas the sculpture on the east face, though much more weatherworn, is of a style that could not have been designed before the fourteenth, or perhaps even the fifteenth century.  The arms of the Christ in this instance are drawn upwards in an unusually oblique direction.  It is impossible that these two representations could have been executed at one and the same date.  The circular outline of the head, too, is peculiar, and suggestive rather of a gable-cross than of a standing cross.  Possibly the west face only was sculptured in the first instance, for a gable-cross, the sculpture on the east face being added later in order to adapt the stone for the head of a churchyard cross.”

Although I’ve gotta say that the three carved figures with the upright arms strikes me more as three females than any crucified character and may be an early depiction of the three Mary’s.

One of the early ministers at Mitton church was none other than John Webster, who wrote the highly influential work, Displaying of Supposed Witchcraft, which denounced much of the Church’s obsession and murder of countless people under the auspice of some spurious devil and demonological bollocks which, even today, some still suffer to endure.   Webster was only at Mitton for a few years, before moving into deeper Yorkshire and setting up at Kildwick.