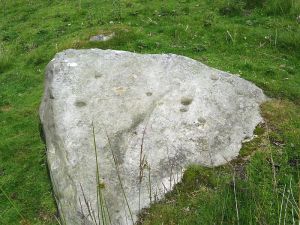 Park at Stump Cross Caverns on the B6265 road, then walk down the road for 200 yards till you reach the track on your left running over the fields in the direction towards Simon’s Seat.  Walk on the track for about 600 yards until there’s a change of direction in the adjacent walling and then watch out for the dirt-track on your right, curving towards the small valley (if you hit the Skyreholme Wall carving (413), you’ve gone 100 yards past the turn-off). Go on here until you see the overgrown track on your left into a small disused quarry, and head right, down the grassy slope, checking out the few stones ion front of you 20 yards down.  You’re damn close!

Carving no.404 (after Boughey & Vickerman)

A simplistic carving that was first described by fellow antiquarian Stuart Feather (1964), this is one of at least four cup-marked stones in a small group here, above the valley of Skyreholme Beck — better known at this part of the valley as the Troller’s Ghyll, haunt of various heathen lore.  Although some of the carving has now been covered by the growing Earth, you can still see the majority of at least thirteen cup-markings on its roughly triangular flat surface.  Not much more can be said of it!

Although we have no lore relating to this specific carving, the small valley over which this carving looks was long known as the abode of the legendary bharguests, or black dogs: underworld creatures of earlier heathen myths.  Faerie lore can also be found a short distance further up the same stream.