Follow the directions to reach the Lippersley Pike cup-marked stone, then keep walking westwards, but go up the slope immediately on your right (north) and walk upwards along the path to the notable stone structure at the top-end of the ridge a coupla hundred yards ahead.  Once there, you’re standing on it! 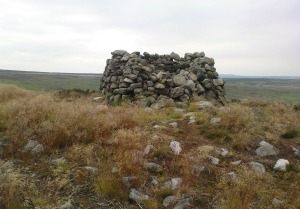 A little known site with some excellent 360° views all round, reaching as far west as Pendle Hill, north past Simon’s Seat, and east onto the far reaches of the North York Moors.  The landscape here is truly superb!  And humans have been here since, it would seem, mesolithic periods at least, if Cowling’s finds are owt to go by! For although he described the much denuded tomb that we can still see under the herbage and recently-built shelter, there was also, “on the northern slope…a small occupation immediately below the summit on the northern side.”  We found remains of it on our visit here the other day.  But of the tomb itself — which Mr Cowling thought was neolithic in age — he wrote:

“The highest point of Lippersley Pike, on Denton Moor, is crowned by a stone cairn 1083 feet above sea level, and overlooks, on the northern side, a small site which appears to have been occupied by the ‘Broad Blade’ people, for there occur several pieces of patinated flint, along with scrapers and worked blades.”

Cowling then describes a number of flints and other prehistoric working utensils that he found all round here.  The remains of the cairn measure some 25 feet east-west and 23 feet north-south.  There has been no excavation here, although the fella’s who dug out much of the stone to build the shooter’s butt on its top may have found summat, but have kept it quiet!

The cairn is an ancient marker along the boundary line marking the townships of Denton and Great Timble and was visited in perambulation walks in previous centuries.  Grainge (1871) describes the extensive perambulation in his Knaresborough Forest work.  ‘Lippersley’ itself first appears in records from 1576 although Smith (1963:5) does not suggest an etymology.  The place is worth visiting as a good starting point to explore the other little-known prehistoric remains on these moors, including the Crow Well settlement, the Heligar Pike tomb, etc, etc.

Cowling, E.T., Rombald’s Way: A Prehistory of Mid-Wharfedale, William Walker: Otley 1946.
Grainge, William, The History and Topography of Harrogate and the Forest of Knaresborough, John Russell Smith: London 1871.
Grainge, William, The History and Topography of the Townships of Little Timble, Great Timble and the Hamlet of Snowden, William Walker: Otley 1895.
Smith, A.H., The Place-Names of the West Riding of Yorkshire – volume 5, Cambridge University Press 1963.