Long since destroyed, we are thankful to the writings of Thomas Booth (1899) that this site was recorded.  In his rare work on the prehistoric burial sites of the region he told us how this tomb was unearthed, 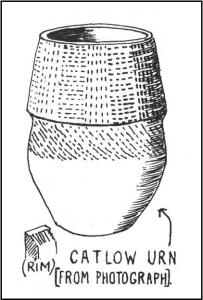 “in March 1854, at Catlow quarry, in Marsden (Heights), a few miles across the hills from Todmorden in the direction of Colne, where a number of workmen who were engaged baring the rock came across two or three cinerary urns.  These were very carelessly handled by the men, and as these vases are almost always made of clay only partially baked…they are very easily broken; the result, therefore, of the rude treatment of the quarrymen was that the vessels were broken to pieces.”

The mound from which the urns had been dug was also destroyed, but apparently the last remnants of the urns were presented to the Burnley Literary Institution sometime in the late 1890s — though where they’ve travelled since then, 120 years on, I have no idea!