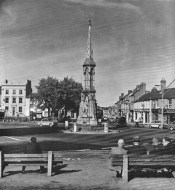 The original stone monolith that stood here has long since been destroyed (by christians arguing amongst themselves) and the ornate edifice that we see today was erected in 1859 to commemorate the marriage of Queen Victoria’s eldest daughter, Victoria Adelaide Mary Louisa, to Friedrich Wilhelm of Prussia.  Standing more than 52 feet tall, it is of a neo-Gothic design and is one of the tallest crosses in the country.  Originally there were going to be six carved statues cut into the niches of the cross, but this was later reduced to three.

First mentioned in place-name records from 1478, the original stone cross was itself very prominent, rising some 20 feet tall and sitting upon a square base of eight steps.  It was described by John Leland in his Itinerary when he visited the town sometime between 1535 and 1545, who said:

“At the west part of the street…is a large area, having a goodly cross with many degrees (steps) about it.  In this area is kept every Thursday a very celebrated market.”

The old cross was also a site where public notices and proclamations were dispensed to local people and seems to have been an old meeting place.  Whether it had a prehistoric predecessor isn’t known.

The nursery rhyme we’ve all recited when we were kids and growing-up, has much of its origins around this ornate edifice and in the 20th century was thought to have its origins in pre-christian practices hereby, but this is questionable.  The rhyme, to those who don’t know it, goes:

Ride a cock-horse to Banbury Cross,
To see a fine lady upon a white horse,
With rings on her fingers and bells on her toes,
She shall have music wherever she goes.

“This rhyme was first recorded in 1784, but it probably originated much earlier.  The Banbury Cross mentioned was destroyed at the turn of the 16th century by the Puritan inhabitants of Banbury.  It has been suggested that “bells on her toes” points to the fifteenth century, when a bell was worn on the long tapering shoe of each shoe.  It has (also) been thought that the “fine lady” was Queen Elizabeth I, or Lady Godiva.”

Another option identifying the “fine lady” in the rhyme is perhaps a member of the Fiennes family, ancestors of Lord Saye and Sele who owns nearby Broughton Castle.

To Ronald Goodearl, for use of his 1973 photograph of the Banbury Cross.