Posted on September 4, 2010 by megalithix

The first cursus monument discovered in Essex, archaeologists were fortunate when they came to excavate the site in 1979 as they found it almost complete.  A rarity these days!  Close to the Springfield Lyons causewayed enclosure monument, the cursus here was some 45 yards across and 750 yards long.  Like a number of other cursuses, the Springfield one was dead straight all the way down, running northeast to southwest with squared terminii at both ends. (of the Bi category, as Loveday called them)  And it appears to have had quite a long period of use. 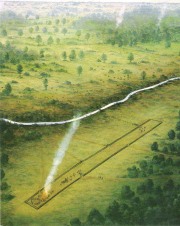 The ditch that constitutes the very outline of the cursus — averaging between 3-4 feet in depth all round — was cut into the earth in the neolithic period.  It had small ‘entrances’ at certain points along its longer axis, both on the east and west sides.  The flat ends of the cursus were both ‘closed’, without entrances or breaks of any kind.  Some depositional remains were found scattered at different spots along the course of the ditch: neolithic pottery and flints in both the northern and eastern ditches, but archaeologists were unsure whether these deposits were left at the time the monument was in use, or at a later period — though it seemed consensus opinion that the deposits were from a period when the cursus was in use.  Charcoal remains were also found, but these were associated with an internal timber circle that was erected within the northeastern end of the cursus.  The timber circle was found to have consisted of 14 upright wooden posts arranged in a near-complete ring, some 26 metres in diameter.  It seems highly likely that this part of the monument had some ritual or ceremonial function relating to the dead (“mortuary practices” is the term used at the moment!).

Later excavation work here in 1984 found there to be various other linear and pit-like features within the confines of the monument, and what seemed to be the remains of a barrow beyond its eastern end.

Archaeologist David McOmish (2003), thought that “alignment is also significant,” saying that the “Springfield Cursus, 700 metres long, is aligned on a smaller enclosure some 300 metres away.”  The alignment potential here was first suggested by Pennick & Devereux (1989), albeit pointing “to the village of Wexford just over two miles to the southwest.”  McOmish also suggested there may have been some an astronomical reason for the alignment of the monument NE-SW, but I’m not aware whether this has been explored further.

The creation of these huge monuments had obvious relationships with human death rites, the spirits of trees, and celestial gods.  But much more research is needed at these sites if we’re to find out more about the nature of these prehistoric giants in the landscape.