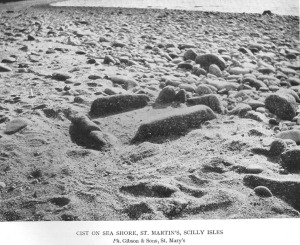 The remains of this old tomb were first noted by Mr Alexander Gibson, whose photograph of the site is here reproduced.  Thought by Paul Ashbee (1974) to date from between the Iron Age and Romano-British period, the site was first described in O.G.S. Crawford’s (1928) essay in Antiquity journal.  It was just one of several such sites in relative proximity to each other and which, due to them being so close to the sea, have been all-but washed over by Nature’s advance.  Mr Crawford told that this,

“cist on the shore…is on St. Martin’s, between Crethus Hill and English Island Point, about 20 yards from the edge of the rushy bank, and at approximately high water-mark.  It is oriented north and south and is 3 feet long by 2 (feet) wide.  It has now no capstone.  The cist when found was full of coarse, gravelly sand and stones, which were cleared out; amongst this were parts of leg bones (the joint-ends missing) and smaller fragments; then a piece of a human jaw, without teeth, and finally the skull.  The facial portion was missing.  The skull fell to pieces on removal but it and all the other pieces were preserved and the cist filled in again.”

In the same article Crawford notes that “nearby, to the west, were two or three other cists of the same type, and many years ago yet others were observed, both round this bay and at Lawrence’s, to the west of Crethus Hill.”

Pastscape Notes on Monument no.303793