Same direction as for cup-and-ring carving 582: from the Askwith Moor Road parking spot, walk up the road (north) 300 yards until you see the disused quarry on the moor to your right.  From here, head down onto the moor, straight down past the quarry for about 200 yards, angling slightly to your right.  You’ll notice some overgrown ‘lumps’ in the heather — a cairnfield no less! — go just below these and watch out for some rocks emerging from the heather.  This carving (and its neighbours) is on one of ‘em!

This impressive carving is one of a number very close to each other, in the ruins of a cairn-field (though there’s some debate as to whether it’s medieval, prehistoric, or just quarry-spoil).  Peppered with many cups on the upper surface of the stone, we also have carved lines and cup-marks along the east-facing edge of the rock aswell.  I think it was Eric Cowling (1937) who was the first person to describe this stone (where he listed it as stone no.10 in his Otley survey), saying: 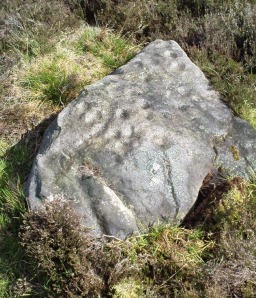 “On the rise above No.9 is a cope-shaped boulder which is almost covered with cup markings and winding grooves.  One broad groove winds from the ridge, rising from a cup, and is continued to the margin.  Two cups are linked by a curve which is continued to the same edge.  The eastern side of the stone is almost upright and bears two cups with grooves running to ground level.”

Due to the similarities in design on this stone and that of carving no.618 in Fewston valley bottom a half-mile away, Cowling thought that it likely that the same person did both carvings.  Well….y’ never know!