From Heysham village centre by the little roundabout, go down the gorgeous olde-worlde Main Street for about 150 yards, keeping your eyes peeled for the little track up to the tree-lined church of St. Peter.  Just before going up the path to the church, set back at the roadside, you’ll see an old pump in an arch in the walling.  That’s St. Patrick’s Well! 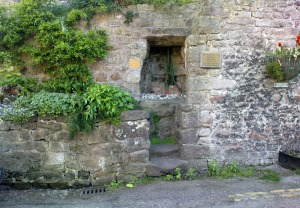 Not to be confused with another St. Patrick’s Well a few miles north of here, little has been said of this old holy well in literary tomes (even Henry Taylor’s (1906) magnum opus missed it!)  Sadly the waters here have long since been diverted (which violates religious tradition, quite frankly), and all we see today is an old iron water-pump set inside a stone arch, beneath which – I presume – the waters once ran.  An old plaque on the site of this ancient well tells:

“This is one of two holy wells in Heysham village (the other, Sainty Well, is on private property and covered over), whose dedications are long since lost.  Latterly the water from this well was used for utilitarian gardening purposes within the confines of the old rectory.

“Previously the well had fallen into disuse, suffered from surface contamination and became rubble-filled when the bank above gave way in the mid-1800s.  In the early 1900s, the well-head was again rebuilt and the well itself was cleaned and made safe by capping with concrete.  Recently (May 2002) the well-head has been refurbished and water artificially introduced, thus turning a derelict area into a feature of the village.”

It would be good if local people could complain to the regional water authority and make them redirect the waters beneath the well, back to the surface, to allow devotees — both Christian and otherwise — to partake of the holy blood sanctified by St. Patrick many centuries ago.  And without fluoride or other unholy chemical compounds that desecrate our waters.  Just the sacred waters of God’s Earth please!

This is one of the many places in the British Isles where St. Patrick was said to have landed after he’d converted all the Irish into the christian cult!  One of the traditions was that St. Patrick said the well would never run dry — which was shown to be untrue when the waters were filled in with rubble in the 19th century.  The same saint also used the waters from the well to baptise and convert the peasants of his time.

Quick, R.C., Morecambe and Heysham, Past and Present, Morecambe Times 1962.