Take the road up across from Ilkley train station uphill towards the moor until you reach great rocks on your right.  From here, the Cow & Calf Stones car park (packed with tourists and litter everywhere these days), go up the steep footpath onto the moor.  As you level out looking across the first moorland ridge, to your left is a rounded hillock.  Go into the heather there and near its small peak and you’ll find what you’re looking for.

This is a nice big stone, found amidst a clump of other stones, that gives the distinct impression of once being a large cairn or similar artificial prehistoric feature.  But that’s wishful thinking on my behalf…  This long fat 10-foot long rock has the distinct signature of someone who thought it a good idea to carve his little name on the carving in 1978, as the name of the rock tells: “Wray Nov 78” — vandalism which the local Ilkley Parish Council and local businessman Tom Lonsdale validate as little more than “twenty-first century informal unauthorised carving.”  Beneath the great artist’s signature we find two distinct cup-marks above a large rounded bowl, inside of which seems to be the impression of an old ring, but this seems due to the actions of water and lichen.  There are perhaps another two faded cup-markings alongside those distinctly visible.  In Hedges (1986) survey he described the “top flat surface has three cups and one basin” — so let’s play safe and go with that! 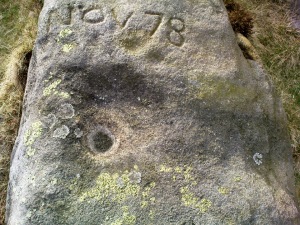 It’s a good stone, sat upon a fine ridge with distinctive views for miles both east and west along the valley of the Wharfe, and north to the ancient settlements and burial grounds of Middleton Moor on the other side of the River Wharfe.  From here, behind and up onto Ilkley Moor, unfolds its greater mythic history, scattered and hidden over differing ages.  In years past, this site was a fine one for reflection and insight.  Today, one must venture further and to other sites for such quiet realities. Close by you can find the double-ringed carving of stone 318 and other faded cup-mark stones nearby.