Taking the roughly north-south road betwixt the village of Elton and the town of Youlgrave, rising up to see the great rock outcrop of Robin Hood’s Stride, park-up by the roadside and walk down the path across the fields to the Nine Stone Close stone circle. Once at the circle, the walling closest to the stones runs along a bit (north), then downhill. Follow it. About 25 yards before hitting more walling that crosses your path, there’s a break in the wall to a field immediately left. Just below this gate opening, in the same wall, a few yards down, look for the stone! 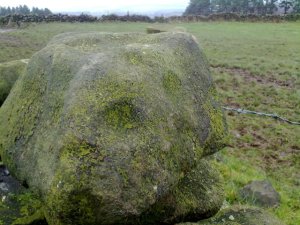 This small carved stone, typical of the size you get in drystone walls all over the country, was discovered for the first time on November 29, 2009, by Geoff Watson, during an ambling foray exploring the megalithic sites in and around the Birchover district.  Not quite sure how his nose picked this little fella out, but once seen (and eyes adjusted!) it was obviously a portable cup-marked stone.  Though what, we first wondered, was it doing in the walling here?

Similar in size and form to the Bent Head cup-marked stone found in drystone walling near Todmorden, West Yorkshire, the proximity of the Nine Stone Close megalithic ring further up the slope from this example illustrated that prehistoric man found this location of some importance; but as the cup-markings — two definites, perhaps a third — had been etched onto a small portable rock, typical of those found in prehistoric tombs, we wondered whether or not a prehistoric grave had once stood close by. Thankfully, a persual of Barry Marsden’s (1977) catalogue later proved fruitful.  For in the adjacent field below where this carved stone sits in its wall, at SK 2255 6286, there’s a scattered mass of loose rocks and smaller stones (akin to the one here with its cup-markings), which Marsden listed as a prehistoric tomb.  It seems probable that this cup-marked ‘portable’ originally came from this much denuded burial spot.

NB – Please note – the images we took of the stone aint too good as the sky was grey, cloudy and overcast all day. We await a better visit on a finer day, when conditions allow for better images. As we all know, gerrin’ decent photos of cup-markings and their ilk can be a pain in the arse even on the best of days!