Follow the same directions as to find the Lunar Stone, Spotted Stone, etc.  Go thru East Morton village up the steep moorland road, east, and where the road levels out there’s a right turn and a trackway on your left which leads onto the moor.  Go ½-mile up this track till you hit a moorland ‘footpath’ signpost.  Stop here and walk due west (left) for a coupla hundred yards.  If the heather’s grown back you aint much chance of finding owt – but if there’s only low growth, amble about zigzagging – and keep your eyes peeled! 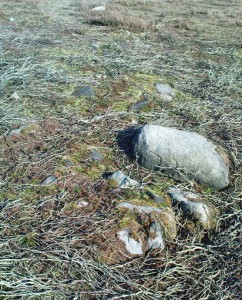 Although there’s been no written record of the Stanbury Hill remains until very recently, it seems quite probable that Mr Stuart Feather would have come across at least parts of these remains when he uncovered the rock-art in the same vicinity, but he never made public his finds.  He was a diligent researcher and finder of cup-and-ring stones, nose to the ground sorta chap, and it would be odd for him to miss the other remains on this hill.  For as we now know, there are undeniable evidences of considerable neolithic and/or Bronze Age walling scattered along (mainly) the southern side of Stanbury Hill, running mainly along an east-west axis, but there are also examples of the walling running roughly north-south.  In at least one position near the western end of the ridge, halfway down the south-facing slope, is what seems to be the unmistakable trace of an enclosed hearth.  At the time of writing a series of archaeological digs are, slowly, being done hereabouts, so it will be good to read their final evaluations.

Very close to some parts of the walling we find the remains of old cairns, and at least one cup-and-ring stone has been carved along the axis of one line of walling (it reminded me very much of the Bronze Age settlement remains found at Snowden Moor, over the northerly horizon, in the Washburn Valley).  Several other previously unreported cup-marked stones have also been found here (we’ll highlight them on TNA in the coming weeks).

Upon first impression the remains found upon and around Stanbury Hill seem more related to mortuary practices than what we’d call ‘domestic’ living practices, as the prevelance of carvings and cairns indicates.  But we’ve gotta be cautious here, as in many sites the dead were kept with the living; and as we find in many traditional or aboriginal cultures, the land of spirits and that of the living are much more closely allied than in our profane ‘Western’ paradigm.

More from this site in due course…