Posted on September 9, 2009 by megalithix 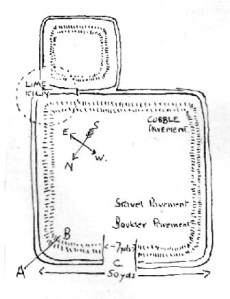 Various ways to get here. From Worsthorne village, go east, up past the church, uphill following the dead straight path.  After about 600 yards there’s a crossing in the footpath: go left here and walk another coupla hundred yards, over 2 walls, and after you’ve past the second wall you’ll notice the earthworks in the ground to your right.  That’s it!

There’s nowt much to see here to be honest.  It was included in Walter Bennett’s (1946) survey of ROMAN remains (oh dear) in the region — and his archaeological description of this place certainly seems to imply it was those doods (the Romans) who built this structure and not our neolithic ancestors.  He wrote:

“Ringstones is a rectangular enclosure 50 yards square, surrounded by a mound or rampart 2 yards wide and one yard high, and an outer ditch two yards wide. Sepereated from the main enclosure by the ditch on the southeast side is another enclosure 18 yards square. Excavations made in 1925 gave the following information: a gateway, seven yards wide, was paved with boulder stones regularly laid on a gravel foundation, and on the south side of the gateway flat stones were sunk below the general floor level to act as a drain; a regular course of large stones flanked the gateway entrance on either side, and a foundation or irregular boulder stones was laid outside the gateway between the rampart and the ditch: inside the enclosure and 9 inches below the present grass surface., a floor had been made of gravel in some places and of flat stones or cobbles in others; the rampart was of earth and stones; a well-constructed road, 7 feet wide, ran from the earthwork in the direction of Bottin Farm, wich is situated on the Worsthorne-Roggerham road.”

There used to be a rough circle of stones on top of the site (probably giving the place its name), but these were apparently from the old remains of a lime-kiln from the 16th or 17th century — not prehistory.  There is, therefore, a case that this site may not be prehistoric as archaeologists have classed it — and if the ground-plan above is anything to go by, you’d have to say it looks less than promising.  More diggings are needed!