Follow the footpath running from the Rivock TV mast northwest, where it cuts diagonally across the field, heading towards the drystone wall.  About 200 yards before the walling – stop! It’s just to your right-hand side, very close by!

First discovered in July 2009 when the hardworking Keighley volunteer, Michala Potts of Bracken Bank, did further rovings round the long grasses hereabouts.  Its name comes from the fact that it’s found just next to the footpath that cuts across Rough Holden from the TV mast beneath Rivock.  The carving’s a very simple plain design, as the photos show, with just three faded cup-markings etched onto the stones northeast face. 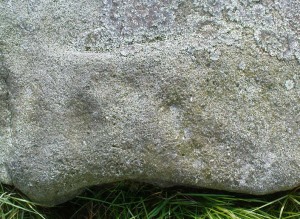 This stone aint too far from the cup-marked Dump Stone and the nearby Rough Holden design, but all across the Holden Rough grasslands are the faded remains of old pit-workings.  It makes you wonder just how many other carvings once existed here.  The fact that this and the other ones nearby still remain is damn lucky!