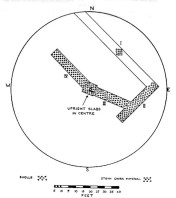 Just over 100 yards northeast of the chambered cairn in Crarae Garden we can see the denuded remains of this old mound, long ago held as the dwelling place of the little people. When it was first described in 1865, a standing stone was reported as surmounting the tomb, but this can no longer be seen.  Further excavations made by Sir George Campbell in 1923 and reported in the Oban Times, showed the cairn to have been 108 feet across and nearly 6 feet tall at the centre — beneath which a “stone coffin” was found.  It was said that two passages ran from this middle chamber: one to the southwest and the other roughly southeast.  Deposits of shells, antlers, and the bones of cattle, deer, horses and sheep were also found here.