Baldwin Stone – with its happy discoverer!

From East Riddlesden, go up the road (over the swing-bridge) that takes you onto the moor-edge (ask a local if you have trouble).  Go all the way up till you hit the road which encircles the moor (it’s called the Silsden Road where you hit it).  Turn left for several hundred yards till you see the microwave tower just on the hillock to your right on Pinfold Hill (not the larger TV towers just below the forest).  Walk up there, then follow the edge of the walling till you hit the old Pinus sylvestris trees of Robin Hood’s Wood where 2 walls meet.  Go over the gate and walk to your right for about 200 yards, following the line of the walling.  You’re there! 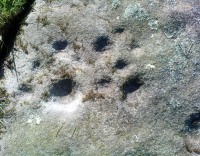 Cluster of cups on western edge

A newly-discovered cup-marked stone, located for the first time on Tuesday, June 9, 2009, by Michala Potts, who was out on an amble with some long-haired halfwit whizzing about getting excited about stupid cup-markings on stones, dragging her back and forth and leaving her in the middle of a bog!  On one occasion when this ‘ere fruitbat wandered off (again!), leaving her alone in the middle of the hills, she decided to check out some rocks a bit further up the slope where she’d been left alone.  And there, along the edge of some walling, right on the edge of the much-denuded Robin Hood’s Wood, a short distance west of Rivock, a curious stone popped out and caught her attention!

Was this a cup-marking she saw before her!?  It certainly was!  But she didn’t call out to this halfwit who’d left her to her own devices.  She let him just wander off to his sad heart’s content, whilst she got into the nitty-gritty of checking the stone out, uncovering the essentials of the carving while he bimbled off like a freak!  And what a nice carving it was she found…

First sketch of the stone

Although no accurate measurements were made of the stone (it was bigger than 10-inch!), at least 17 cup-markings were counted here: one singular and very well-preserved cup, alone on its southern edge, right by the walling.  But the main feature of the design is a cluster of cup-marks (at least 11) on the western side of the rock — one part of this cluster having the appearance of the figure 5 on a dice!  Several other well-defined cups occur on the central and more northern end of the rock.

Eventually, her sad stone-wandering fella returned, forlorn, having found no new carvings of his own (poor soul!).  And so she took his poor little hand, and took him to see the little prehistoric treasure she’s uncovered — and her sad little man got all smiley and … well, you know what they’re like!

Additionally however, for the archaeo’s amongst you: if you come wandering up here to check this carving out, you’ll notice the remains of many large upright stones in a lot of the old stone walls round here.  Many of these are the remains of Iron Age walling.