Dead easy to find this one!  Get to the Cow & Calf Hotel and walk up the slope onto the moor ahead of you.  If you want a direction-pointer, head for the large, seemingly overhanging rocks which are the Pancake Stone, at the top of the ridge, but a few hundred yards to the right (west).  Once you reach the level on the moor proper, you’ll see this large haystack-shaped boulder close by.  That’s it!

This tends to be one of the spots I stop at when doing my tourist walks, to i) let folk get their breath back after ambling from the car park, via Hanging Stones and Map Stone; ii) to drink in the view, and, iii) to begin acquainting themselves with the landscape as it was when this stone was carved (over many decades, perhaps longer), and the animistic cosmology underlying people’s notions of their land.  It can be quite an education…

The Haystack Rock was a very important boulder in the mythic landscape on this plain. It stands near the western end of the Green Crag Necropolis: a huge area of land on these moors where, quite simply, the people of these hills laid their dead.  Effectively, the Haystack Rock stands on the edge of Ilkley Moor’s “Land of the Dead”.*

Highlighting this quite firmly, we find that prehistoric walling ‘separates’ this great boulder from the other part of the Plain close to its east and southern sides (walling on its western side is as yet unproven).  It was a boulder that was specifically sectioned-off, away from any tombs.  All along this Plain are numerous small cairns, many with rock-art nearby, and certain parts of the Plain are split into sections by ancient walling (though a precise map of the walling, tombs and rock-art on this moorland ridge has yet to be done).

As far as the textbooks are concerned, we find the first mention of this great carved boulder came from J. Romilly Allen at the end of the 1870s.  By 1900, a number of people had been here and written of its grandeur; but, as with cup-and-rings in general, its non-linear form and design elicited the usual notions of bewilderment, druids and puzzled ideas.  Much like today really!

Drawing of the central design (after Hedges, 1986)

But this is a big and decent carving, with about 60 single cup-markings, 10 cup-and-rings, and various twizzly grooves and lines linking cups to others, and others going to seemingly nowhere.   Some of these lines, of course, may be weathering, or weathered channels emerging from once shorter lines.  We might never really know for sure what the original carving actually looked like.  On the north-facing side is what looks like a decidedly human figurine etched onto this great boulder, in good old cup-and-ring style. I’ve shown this to a few hundred people and they all seem to make the same remark: it’s a woman with her legs wide open — an early form of sheela-na-gig on Ilkley Moor no less! But whether this was intentional (many folk think so), or just us seeing something we want to see (men in particular!), we might never know.

The black-and-white illustration showing in detail just about all aspects of the carving may well be accurate, but it aint anything like seeing the carving in person.  When it comes to ancient rock-art, detailed drawings are one thing, the real thing is altogether much better! 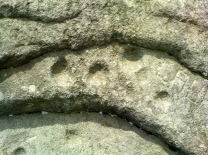 On a very worrying note, we need to draw attention to what amounts to the local Ilkley Parish Council officially sanctioning vandalism on the Haystack Rock, other prehistoric carvings and uncarved rocks across Ilkley Moor.  As we can see on a couple of photos here, recent vandalism has been enacted on this supposedly protected monument.  Certain ‘officials’ occasionally get their headlines in the local Press acting as if they’re concerned about the welfare of the ancient monuments up here, but in all honesty, some of them really don’t give a damn.  The recent vandalism on this stone and others has now been officially recognised as an acceptable form of — get this! — “twentieth / twenty-first century informal unauthorised carving” and has been deemed acceptable by Ilkley Parish Council as a means to validate more unwanted carving on the moorland “in the name of art”!  Of course, their way of looking at this has been worth quite a lot of money to a small group of already wealthy people. But with Tom Lonsdale and Ilkley Council validating or redesignated ‘vandalism’ as “twenty-first century informal unauthorised carvings”, this legitimizes and encourages others to follow in their shallow-minded ignorant footpath, enabling others with equally low IQ (or a business-mind in this case) to add their own form of ‘art’ on both important cup-and-ring carvings, or natural rocks on the moors.  With Lonsdale and Ilkley Parish Council now sanctioning vandalism on the Haystack Rock and other cup-and-ring stones on the moor as a “tradition” of such “twenty-first century informal unauthorised carving”, we can perhaps expect a growth industry in this field…..especially if you’re trying to make a name for yourself in the name of art or alleged poetry.  And if you apply to Rachel Feldberg of the Ilkley Arts Festival, you may get good money for your work… Seriously!

Please contact Ilkley Parish Council and other relevant authorities and express your dismay at their lack of insight and concern for the knock-on effects of their decisions on this matter.  Other plans to infringe even further onto Ilkley Moor are in the business pipeline…

Not too sure what credibility we should give to Nicholas Size’s (1934) extravagant claims, but this was one of the sites he alleged to have seen visions of druidic rites and ghostly figures!

* It’s gotta be pointed out that Ilkley Moor’s ‘Land of the Dead’ extends much further than just the Green Crag.  Much of the extended land above here to the south was an important area, where at some places rites of the dead were performed.  The supposed ‘settlement’ nearby (as well as the lesser known one on the moor west of here, on the moor above Ilkley Crags, near Cranshaw Thorn Hill) was likely to be a place where the dead were rested for a period.  But more about that in the section on the Green Crag Settlement…