Stoodley Pike is unmissable! Get to either Hebden Bridge or Todmorden – ask someone – then get to it! Nice climb – nice view – excellent moors all round! 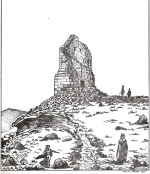 All traces of this site have gone, but local gossip still tells there was once something here. When building work commenced on the huge folly in 1814, in clearing the ground “an accumulation of stones (and)…a quantity of bones” were unearthed. After the huge folly had been built, a curious ritual was made by local Freemasons, from here to the nearby Slake Well. The circle was only a small one, but ideal for the spirit of the ancestor to both look-out from, and fly across the landscape.  In another description of the place from 1832 — wrote E.M. Savage (1974) — local writer and poet, William Law, told how “a rude heap of stones had stood on the site from time immemorial.”

Suggested by earlier writers to have been an old beacon site, though evidence for this is uncertain.  The site was said to be a meeting place of the “gude grannies,” who met here and told old stories.  E.M. Savage (1974) told us:

“Yet another story had it that the occupant, presumably owner, of Stoodley, had to keep the original Pike, the cairn, in neat and good order.  If a single stone was out of place, no one could sleep.  The banging of doors and other noises started up, to remind the owner to tidy up the stones.  Elusive flames were to be seen playing round the stones. So the stories went.”

As can be seen in the artist’s drawing above, done more than a century after the cairn had been destroyed, a ring of stones is shown just below the remains of the earlier of the Peace Monuments, which today carries the old name of Stoodley Pike.