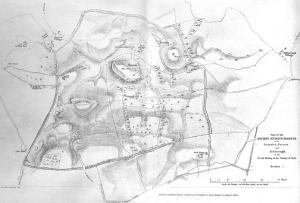 From Scotch Corner on the A1, head on the A66 and take the first right up to and straight thru Melsonby village at the crossroads and on for a few more miles till you hit the hamlet of Stanwick-St.-John.  You’re now in the middle of the fortifications and earthworks! (check the map, right) Get to the nearby church of St. John’s and you’re on what once could have been a henge.

Although the Roman’s came here, the origins of this huge enclosure and settlement — between the hamlets of Eppleby and Stanwick St. John — are at least Iron Age.  It’s very probable that this place has been used by people since at least the Bronze Age, if not earlier — but let’s keep to playing safe (for a change) and repeat what the professionals have found!  Stanwick was recorded in Domesday as Stenwege and Steinwege, which A.H. Smith (1928) and later etymologists tell us means “stone walls,” which obviously relates “to some ancient rock entrenchments found in the township”, or the Stanwick Fortifications no less!

Sir Mortimer Wheeler’s (1954) account of the history and excavation of these huge ramparts found that it was a centre of some importance to the Brigantians. His view was that it was the rebel stronghold of the Brigantian figure called Venutius, ex-partner of the Queen Cartimandua.  Archaeologists who did further work here in the 1980s concluded that it was one of Cartimandua’s “estates” — possibly even the original capital city of Brigantia.

The settlement was enlarged and fortified considerably upon the arrival of the Romans in the first century. Splitting them into three phases, the earliest Phase I area (Iron Age) covered 17-acres; Phase II was extended over 130 acres; and Phase 3 extended the enclosure over another 600 acres.  A further extension of earthworks appears to have occurred, but Wheeler believed them to have been constructed at a much later period.  To allow for a decent discourse on this huge site and its multiperiod settlement, I’m gonna quote extensively Mr Wheeler’s (1954) text on the site, who headed a team of archaeologists in the summers of 1951 and 1952 and explored various sections of this huge arena.

In the introduction to his work, Mortimer briefly mentioned the finding of some chariot burials found close by, though less certain is the exact spot where these important remains came from.  He wrote:

“Of the three accounts, the earliest, dating from shortly after the discovery, states that the objects ‘were deposited together in a pit at a depth of about five feet within the entrenchment at Stanwick.  Near by large iron hoops were found.’  Two years later MacLauchlan showed the find-spot on his map…as a little to the northeast of Lower Langdale, well outside the main Stanwick earthworks, and, in spite of variant accounts, his evidence may be regarded as authoritative.”

Nothing more is said of these finds throughout the book.  Instead, Mortimer guides us through their dig, beginning with the structural sequence of the extensive earthworks that constitute Stanwick’s fortifications, from Phase 1 onwards, saying: 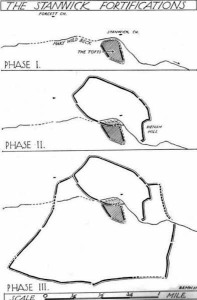 Plan showing 3-phase evolution of the Stanwick earthworks from the Iron Age period at the top, to Phase 3 works in the 1st century AD (from Wheeler's 'Stanwick Fortifications', 1954)

“Phase I.  The nucleus of the whole system is a fortified enclosure, some 17 acres in extent, situated to the south of Stanwick Church and the Mary Wild beck, on and around a low hill known as ‘The Tofts’… The name ‘Tofts’ is defined by the Oxford Dictionary as “Site of a homestead”, or “An eminence, knoll or hillock in a flat region; esp. one suitable for the site of a house.”  Appropriately the field is described by the farmer as a ‘dirty’ one; it produces an abundant crop of nettles which have to be cut twice a year and are a common sequel to ancient occupation.  The enclosure is, or rather was, roughly triangular on plan, conforming approximately with the mild contours of the hill and to that extent meriting the exaggerated designation of ‘hill-fort.’  On the west its rampart and ditch are excellently preserved in a stretch of plantation known as ‘The Terrace’ or ‘The Duchess’s Walk’, where the single bank of unrevetted earthwork rises some 24ft above the ditch… The southern corner has been almost completely obliterated, but a part of it can be traced faintly in the walled garden southeast of the The Terrace.  A stretch of the eastern side still stands up boldly beside the road from Stanwick Church to (the former) Stanwick Hall, but a large part of this side has been demolished for the making of the road, and some dumps of earth immediately east of Church Lodge may be a result of this process.  The northern side approached but stopped short of the brook, and is marked by remains of a counterscarp bank… The main rampart was here thrown into the ditch anciently, doubtless when this portion of the work was included in and superseded by the work of Phase II.  Near the northwestern corner was a stone-flanked entrance, now partially obscured by the northern end-wall of the Terrace plantation.  The rampart was of earth, apparently without stone or timber revetment, the ditch was V-shaped save where, on the northern or lowest side, its completion in depth was stopped by water and the counterscarp bank already referred to was added as compensation.

“Phase II.  Subsequently, at a moment which will be defined in the sequel as not later than AD 60, the hill-fort was supplemented by a new enclosure over 130 acres in extent, so designed as to outline the slight ridge north of the brook, to bend inward round the nearer foot of Henah Hill on the east, and farther west to cut off the northern end of the hill-fort, obviously in order to enclose the brook and its margin hereabouts.  Southeast of Stanwick Church, the marshy course of the brook for a distance of over 300 yards was regarded as a sufficient obstacle, without rampart and ditch, though whether supplemented by a palisade is not known.  As already indicated, that part of the Phase I earthwork which now lay inside the new enclosure was largely obliterated by filling its rampart into its ditch.

The enclosure constituting Phase II had an entrance near its western corner…where 50ft of the ditch, partially rock-cut, were cleared with notable results… There may have been another entrance under the present road-junction immediately east of the Stanwick vicarage, in the middle of the northern side, or less probably, at an existing gap 150 yards further to the southeast.  The rampart was of earth, aligned initially at the back on a small marking-out trench and bank; in front it was revetted with a vertical drystone wall.  The ditch was cut in the boulder-clay and partially in the underlying limestone…

Phase III.  At a date which will be defined as about a dozen years later (c. AD 72), a similar though longer system, enclosing a further 600 acres, was added to Phase II.  It impinges almost at a right angle upon, and implies the pre-existence of, Phase II on the east, and terminates upon the ditch of Phase II on the west.  An entrance can be seen near the middle of the southern side, and less certainly a gap in Forcett Park may represent a second entrance in the western side.  Further stretches of the mary Wild beck were included. The rampart, like that of Site A, incorporated a marking-out trench and bank at the rear, and was fronted with a vertical stone revetment.

Phase IV.  To the southern side of Phase III was added at an unknown period an enclosure of some 100 acres, now subdivided by traces of a double earthwork extending southwards from a point east  of the southern entrance of Phase III… This double earthwork however, is of an entirely different character from those already considered, and appears indeed to overlap the rampart of Phase III at a point where the latter had already been broken through.  It is comparable with some of the double banks which constitute or are incorporated in the Scots Dike at Lower Langdale, farther east; and the Phase IV enclosure is in fact linked with the Scots Dike by a semi-obliterated ditch extending eastwards from its southeastern corner.  Phase IV…may, as has been suspected, relate to the Anglo-Saxon period.”

Links: – Stanwick Iron Age Hillfort – For an extensive overview of the archaeology of this large site, you can do no better than this web-page.