Follow the directions to reach the Great Skirtful of Stones giant cairn (very worryingly being encroached upon, illegally [it’s a protected monument], by employees of Bradford Council digging tracks into its edges).  Walk less than 100 yards to the east, down the slight moorland slope (Leeds & Otley Chevin are in the distance).  You’re here!

This is a very intriguing site.  Intriguing because we don’t actually know what it is!  It’s best seen at the end of winter, shortly after the heather-burning’s been done; but if there’s been no burning here, after a year or two it’s almost impossible to find!

Despite it being only a short distance east of the Great Skirtful giant cairn, very little has been written about it (a surprise in itself!) – but this is down the failings of archaeological professionals  in the area, who still neglect this incredible prehistoric arean.  It was first described in Mr J.N.M. Colls’ (1846) survey of sites in the region, where he thought it to be a prehistoric camp.  It was Eric Cowling (1946) who saw fit to describe it as an “enclosure” — so I’m copying his idea so I don’t get into too much trouble!  Thinking it to be a Bronze Age monument, he wrote:

“On the main ridge of Rombald’s Moor and about eighty yards to the east of the Great Skirtful barrow, is a small circular enclosure with a diameter of twenty yards.  There appears to have been an entrance on the eastern side, which is protected by a short length of banking to the east.”

The “length of banking” he described didn’t seem apparent when we visited the site yesterday (23.3.09), but we intend a further exploration of this and the adjacent monuments in the coming weeks and hope to locate it!

Interestingly, the archaeologists Faull & Moorhouse (1981:1:103), in their otherwise fine survey, actually doubted this place as having any prehistoric status, without giving any reason why—which was a big mistake. No doubt they spent too much time in offices and board meetings instead of getting out a bit more!  Unless evidence to the contrary can be strongly presented, this site must be classed as undoubtedly prehistoric in nature (Bronze Age or Iron Age certainly) and almost certainly had something to do with rituals of the dead. 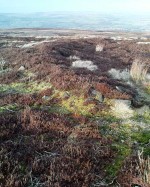 Southern edge of the ring

From outer edge to outer edge the ‘ring’ measures 102 feet across, N-S, and with a rough maximum 101 feet E-W, being diameter, being some 300 feet in circumference.  When you look at the site at ground level it appears to be an almost perfect ring, consisting of an embankment little more than 2 feet high at the most, with entrances both east and west. However, as the aerial images show, the perfect circle aint quite so perfect!  But at ground level, there’s a certain uniformity about it.  The embankment is in very good condition around much of the ring, with only slight damage in certain parts.  The western opening strongly implies a direct relationship with the Great Skirtful cairn — which would infer this monument to have more of a ritual nature rather than the simple domestic enclosure, inferred by Colls and Cowling.  Adding to this we find a tumulus 100 yards east and the remains of several other cairns nearby, making the site almost hemmed in by death-sites.  A prehistoric cemetery is a short distance further down the moorland slopes to the east. Add also the fact that the Burley Moor stone avenue runs immediately south and the death-motif has to be increased.

What do I think it is? Not sure! The thought that it’s a previously unrecognized henge has crossed my mind…but henge monuments aren’t things that I’m very clued-up on, so wouldn’t like to say for sure.  If there are any university archaeology students out there who are into getting their feet dirty, give this site a look-over.  It’s intriguing, in very good condition, and could do with an accurate ID!