This is a stupendous site!  It looks like some of this may have been quarried, a long time ago, but it also seems that nothing at all has been written about it – even in the simple travelogues beloved by our Victorian historians.  To come across it quite by accident, as I did (only yesterday), was excellent!  When I first got here, by following the wooded ridge betwixt Hollins Lane and the main Keighley-to-Steeton road (A629), the place seemed brilliant; but as time went on and my amblings through the sometimes dense and also very old woodland were overcome by the dream of the place, I couldn’t believe how this place had become forgotten.  Adrenalin rushed through me for a while, but then it was the dream of the place again.  The memories here were ancient – and you could feel them.  In places there was the solace of darkness, beloved of those who know old trees and dangerous places.  For here, walk the wrong place too quickly and Death comes.  Broken limbs await in the curious gorges which just appear in the woods, only a yard wide, but 50-60 foot deep, only to vanish again away from sight a few yards later.  Caves and dark recesses, seemingly unknown, reach out to climb down.  And all round is the aged covering of lichens and mosses that know centuries. 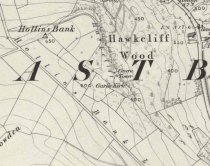 The Kirk itself – meaning simply, ‘place of worship’, in the old sense – is like something from Lord of the Rings!  If you walk along its top, as I did, the great cliffs below come late to the senses.  A curious ridge of cup-markings, seemingly natural ones, stretch along the very edges of the drop – which stretches on for some distance.  And then as you walk along its edge, you find this great drop which looks north, is now on both sides of your feet!  It’s quite breathtaking!

Cup-markings on the edge (probably natural)

Trying to get down into the gorge below can be done, but it’s a bit dodgy!  If you aint agile and crazy, stick to doing it by walking round – a long way round…  Someone a few centuries back either cut into the rock, or laid steps, reaching into the mossy gorge, which runs to nowhere.

You can appreciate how this place would have been a sacred site:  it’s big, it’s old, it takes your breath away, and it looks across to the great Rivock Edge where many fine cup-and-ring stones were cut.  I’ll try and get some images of the place when I call here again in the very near future, but they’ll never capture the experience of being here.

The only thing I have come across which seemingly relates to this great edifice, tells of a great cave in the woodland, which legend tells stretches many miles to the north and emerges at Bolton Abbey. (Clough 1886)  I wondered about the potential visibility factor in this legend and found it obviously didn’t work.  However, if you stand on a certain part of The Kirk and look north, a dip in the horizon enables us to see, far away, hills which rise up directly above the swastika-clad Bolton Abbey.  Twouldst be good to work out exactly which hill above the Abbey we can see from here.

On another issue, John Clough (1886) told that “on top of the rock there is a footprint and the initials of one of the Waites, who is said to have leaped over the chasm.”