Posted on September 7, 2008 by megalithix

If you’re a bittova unhealthy dood, give this site a miss, as it takes a bitta getting to!  Otherwise, get to the rocks at the very bottom of the Druid’s Altar and walk to the right (east) until you hit the walling a few hundred yards along.  Near the bottom of the slope, where the land levels out, there are several lovely moss-strewn boulders in their music of graceful hues.  One of them, you’ll see, has water emerging from it base.  You’re here!

I first visited this old site with the holy wells writer Edna Whelan sometime in the early 1980s, when we went in search of the sacred spring of water known as the ‘Altar Well,’ shown on early maps to be just a short distance beneath the small cliffs called the Druid’s Altar.  We didn’t find it!  Another visit with Graeme Chappell and Edna (again) sometime later also proved fruitless – but something else was found which we didn’t know about on our first sojourn: the Druid’s Well, or more accurately the Druid’s Spring. (no stone trough y’ see)  Not far from the spot that the Altar Well could once be seen, this beautiful spring of sweet water emerges beneath the rich lichen-encrusted boulder, painted with dappled mosses and an overhang of vivid ferns.  Tis a fine oracular site, if ever there was one!

The waters run slowly from beneath the great old rock, upon which grows a fine specimen of a birch tree – a truly old thing!  And if there was ever any truth about this regions association with the druids, one of their most important sacraments grows profusely here when the season is right: no, not mistletoe (though it can be found sparingly upon the old oaks), but a wealth of the sacred Amanita muscaria, to whose spirit visionary journeys were bestowed. 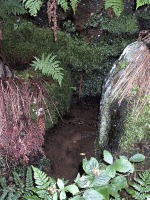 Close-up of the waters beneath the boulder

The name of the woodlands in which our Druid’s Spring emerges — the Hollin Wood — might also have had some associative relationship with this well, or the Altar above (modern maps call it the Hollin Plantation, as much of the old woods have been felled and copsed by modern man).  Place-name texts ascribe this to be the ‘woodland of holly trees’, but during our wander through the woods a few weeks ago (when we got the photos of the Druid’s Well) holly trees were not common.  It may be that the Hollin Wood originally derived from ‘holy wood’, as this old well and the Druid’s Altar above would have surely made the site sacred to the druids.  Just a thought.  We will probably never know (if someone finds out for sure, one way or t’other, lemme know and I’ll amend where necessary!).